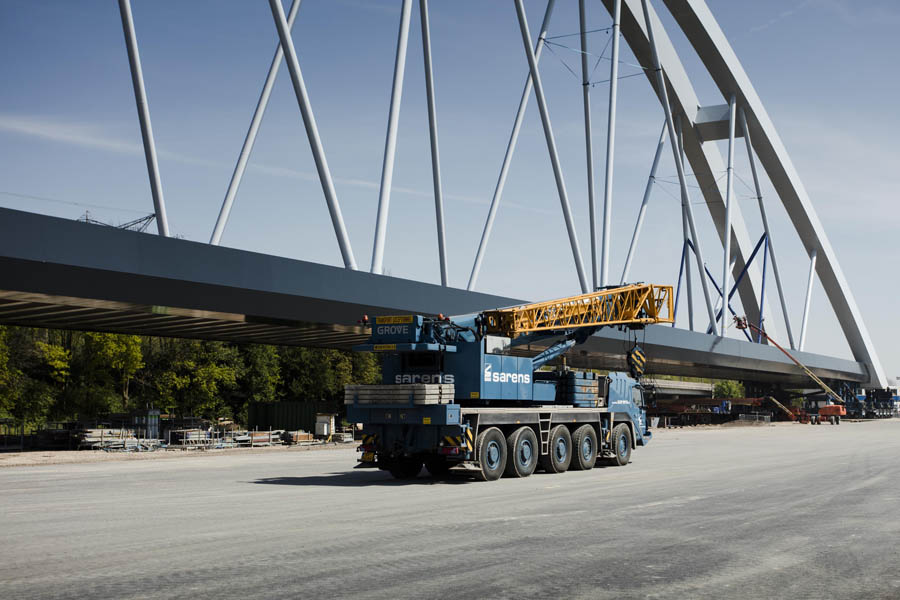 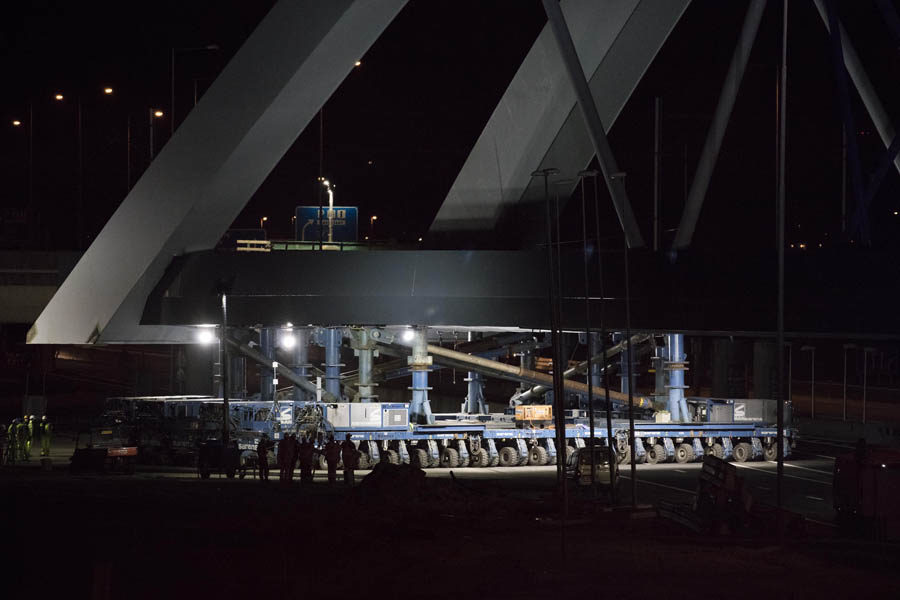 The Dutch government awarded a one billion Euro contract to build, upgrade, and later operate an important section of the A1 and A6 highway between Amsterdam and Almere to the "SAAone" consortium. A part of the project involves building and erecting two complex bridge structures, an aqueduct, and a railway bridge.

Having accomplished key projects in bridge installation in Western Europe and specifically in the Netherlands, Sarens was contacted by Victor Buyck Steel Construction, one of the largest Belgian steel manufacturers, for the "SAAone" consortium to undertake the project of the moving and placement of the 255m long, 17m wide, and 50m high railway bridge, weighing a whopping 8400 tonnes.

It is the heaviest railway bridge ever moved by road in the world and by far the longest single-span bridge across a motorway. The 8.400-tonne bridge had to be moved 400 metres from the location where it was assembled to the correct site over the A1 highway.

The A1 highway normally carries almost 200,000 vehicles per day, and traffic tends to be heavy during weekends as well. Considering the great amount of traffic inflow, the task was designated to be carried out during the night for which the A1 was closed from 20:00 hrs on Friday, May 6, 2016 till 12:00 hrs on Saturday, May 7, 2016.  The entire operation from driving start to set-down on the bridge foundations took about 6 hours and the motorway was opened three hours ahead of schedule.

Sarens steered the huge steel bridge using 244 axle lines SPMT K2400-ST, 122 axle lines on each side which were spaced 220 meters apart. This is also the heaviest bridge ever to be transported by SPMTs. The high forces due to the large size and weight of the bridge, and the large spacing between the two SPMT groups, made it challenging to design a sufficiently strong supporting structure.

Moreover, the entire SPMT combination was controlled by a single operator. Both SPMT groups, spaced 220 meters apart, were linked together using a wireless data connection; it was the first time ever a wireless data connection was used among SPMT groups over such a long distance. But with proficient engineering and our operations team, Sarens skillfully completed the task much before the initial schedule indicated.

Transport Ministry spokesman, Henk Voerman, in an interview with the Media said that the entire operation had proceeded smoothly. "It was really imposing to watch, particularly from up close when those enormous wheels began to move," he stated. Work will now continue on the bridge and it will be opened in August, when the old railway bridge will be demolished.

To witness this gripping movement of wirelessly controlled SPMTs maneuvering the world's largest railway bridge, click on the links below: