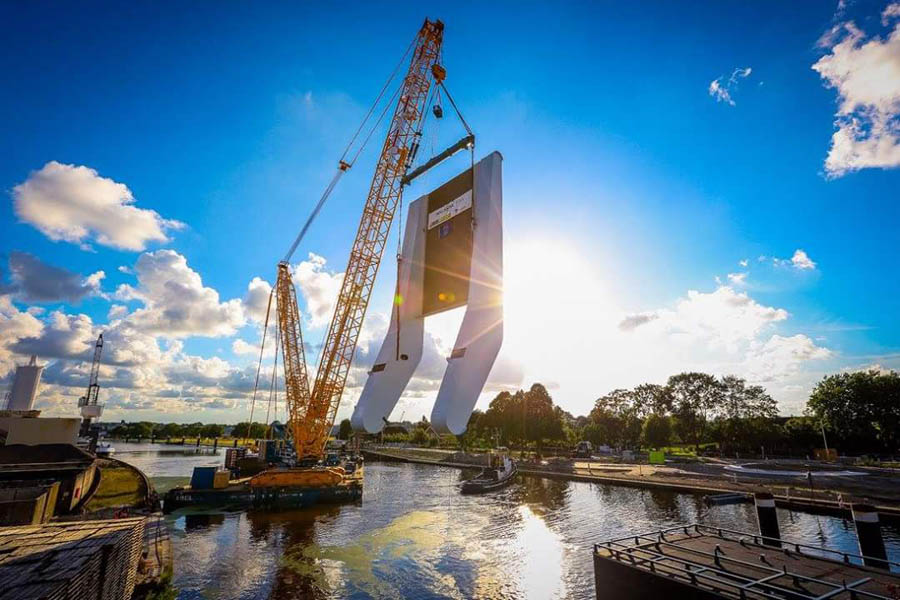 Sarens recently hoisted two bridge sections for the Queen Maxima Bridge Project due for completion in late 2016, in Alphen aan den Rijn, the Netherlands. The balanced tail-bridge that spans the Old Rhine river will divert traffic from the congested city center. With a strong focus on sustainability, the bridge is energy-neutral and shall be put in use by the end of this year. The movable part of the Maxima Bridge is a balanced (bascule) trap type tail bridge. The tails contain the counterweight, which ensures that the bridge smoothly open and close with a minimal use of energy. The typical characteristic of a tail bridge is the high location of the hinge relative to the bridge deck. The high tails give the bridge a beautiful and quirky profile.

As part of the project executed for Hollandia Infra, Sarens was required to hoist two bridge segments, around 30m in height and weighing 230 and 280 tonne respectively.

The canal under the bridge, which was the acting stage for execution of the project, was relatively narrow with the maximum allowed passage width of the canal being around 11.4 metres. On the contrary the load to be lifted was heavier. Meticulous planning and engineering expertise went in the selection of the crane which had to be high on capacity but with a narrow width. The Sarens team decided to rope in the CC3800-1 and work with a superlight configuration to increase the capacity of the crane.

The crane was mobilized on the pontoon in Dordrecht and transferred via water to Alphen. The crane was placed on Sarens twin barges-Karel and Victor. The crane was positioned in such a way that the Superlift weight and crane were on these two separate pontoons to pass the width restricted passages and connected at the site, so they were functioning together as a floating crane. As part of the project Sarens also deployed Sarspin to hoist the bridge segments along with strand jacks and small mobile cranes.

The lifting and hoisting of the bridge segments was a challenging task owing to the prevailing wind and water currents. The two segments were installed one after the other, starting with the segment weighing 230 tonne. The 60 meter main boom was used to lift the two segments.

Each bridge segment was first lifted via ballasting of the crane barge and slowly taking over the weight from the transport barge carrying the bridge. The limited width of the canal just allowed the space for the cranes and barges to move through, which offered a hindrance in the free movement of the crane.

Another challenge that the operations team faced was the Eccentric Centre of Gravity. Once lifted, the Sarspin was specially used in rigging to finally flip and rotate the bridge segment in order to maneuver it on the designated location. About an hour the bridge deck hung on cables above the water for  some finishing works before the crane finally positioned it using mooring lines and tugboats.

Once the first segment was installed the entire hoisting equipment and associated pontoons were split and again moved from the west side to the east side of the bridge to install the second segment similarly.

Since the waterway was closed for the operation, the lifts were performed in limited time with utmost precision to allow for early release of traffic.

Our project engineer, Robin van Oss describes the task as, "The long-term and intensive engineering phase, resulted in an excellent and quite short execution phase. Besides that the men on site executed this job with care and patience, just perfectly". He adds with great poise, "We arrived in silence, did our job, and we left in silence".